Dee
I am a former Protestant who stopped protesting and came home to the Roman Catholic Church at Easter Vigil 2005. I have an interest in all things Catholic, Celtic and Benedictine. I started this blog about a year ago and have recently returned from a long break to resume writing. Hope you enjoy my thoughts and ideas relating to all things spiritual. I am an Associate (oblate) at Holy Cross Monastery (a Benedictine house in the Anglican/ECUSA Communion) in West Park, New York, situated on the banks of the lovely Hudson River. I live and work in beautiful New England. I love to travel, and plans are underway for a return trip to Israel in February 2011. I enjoy music, reading, family and friends. I enjoy blogging about my faith and facilitating the Great Adventure Bible Study, an overview of Salvation History.

St. Michael, the Archangel, defend us in the day of battle. Be our safeguard against the wickedness and snares of the devil. May God rebuke him, we humbly pray, and do Thou, O Prince of the Heavenly Host, by the power of God, cast into hell Satan and all the other evil spirits who prowl throughout the world seeking the ruin of souls. Amen


"All that is gold does not glitter; not all that wander are lost." - J.R.R.Tolkien

"The Christian ideal has not been tried and found wanting; it has been found difficult and left untried." - GK Chesterton


"When I'm attacked by gloomy thoughts, nothing helps me so much as running to my books. They quickly absorb me and banish the clouds from my mind." - Michel de Montaigne (1533-1592)

Don't Forget to Check the Archives

Located on the left hand side of the blog page, the Archives contain links to all previous blog posts that are not currently showing on the main page!

Please check out my Listmania! book lists on www.amazon.com You will find them listed as "Celtic and Benedictine Pathways", "Journey to Catholicism", "Books for the Armchair Traveller and Intrepid Pilgrim" (travel writing) and my newest list, "Growing in Faith". They contain brief descriptions of books I have read and found up-lifting and helpful. Enjoy!

Image appears over Fr. Paul's head during Holy Mass - is it our Blessed Mother? It could be!

Secretary of State Clinton meets our Lady of Guadalupe 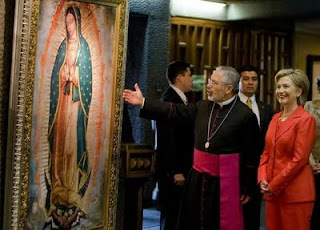 Last week, Patrick Madrid was running a caption contest on his blog,
patrickmadrid.blogspot.com
He was looking for captions for this picture
which shows Secretary of State Hillary Clinton looking at the tilma of Juan Diego in Guadalupe which, of course, shows the famous imprint of Our Lady of Guadalupe.

I submitted my caption and, lo and behold, I came in as a First Runner Up (three way tie)!

Here is how he announced the winners:

The winner and the runners up are those who, in my subjective judgment, best and most cleverly captured the ironic weirdness of the scene: a woman who has made a lucrative career for herself as an implacable foe of the Pro-life movement (and, more fundamentally, a foe of all the unborn children who have been, are being, and will be slaughtered through abortion, as the result of her efforts to support it) being shown the image of the Blessed Virgin Mary, the mother of Life Herself.

There's no need for me to editorialize further on this bizarre juxtaposition of Truth and error, light and darkness, goodness and evil, which is represented by these two very different, diametrically opposed women.

The winner of this caption contest will receive a personally inscribed copy of my book 150 Bible Verses Every Catholic Should Know.

Micaela — "That sinking, nauseous, empty feeling in your abdomen, Hillary? Well, it isn't from the burritos . . ."

Dee — The culture of death meets the Mother of Life.


I, of course, am Dee with my caption “The culture of death meets the Mother of Life.”

Visit Patrick Madrid’s blogspot to see the rest of the wonderful caption entries and read the whole article.
Posted by Dee at 4:09 PM

Labels: Our Lady of Guadalupe