Dee
I am a former Protestant who stopped protesting and came home to the Roman Catholic Church at Easter Vigil 2005. I have an interest in all things Catholic, Celtic and Benedictine. I started this blog about a year ago and have recently returned from a long break to resume writing. Hope you enjoy my thoughts and ideas relating to all things spiritual. I am an Associate (oblate) at Holy Cross Monastery (a Benedictine house in the Anglican/ECUSA Communion) in West Park, New York, situated on the banks of the lovely Hudson River. I live and work in beautiful New England. I love to travel, and plans are underway for a return trip to Israel in February 2011. I enjoy music, reading, family and friends. I enjoy blogging about my faith and facilitating the Great Adventure Bible Study, an overview of Salvation History.

St. Michael, the Archangel, defend us in the day of battle. Be our safeguard against the wickedness and snares of the devil. May God rebuke him, we humbly pray, and do Thou, O Prince of the Heavenly Host, by the power of God, cast into hell Satan and all the other evil spirits who prowl throughout the world seeking the ruin of souls. Amen


"All that is gold does not glitter; not all that wander are lost." - J.R.R.Tolkien

"The Christian ideal has not been tried and found wanting; it has been found difficult and left untried." - GK Chesterton


"When I'm attacked by gloomy thoughts, nothing helps me so much as running to my books. They quickly absorb me and banish the clouds from my mind." - Michel de Montaigne (1533-1592)

Don't Forget to Check the Archives

Located on the left hand side of the blog page, the Archives contain links to all previous blog posts that are not currently showing on the main page!

Please check out my Listmania! book lists on www.amazon.com You will find them listed as "Celtic and Benedictine Pathways", "Journey to Catholicism", "Books for the Armchair Traveller and Intrepid Pilgrim" (travel writing) and my newest list, "Growing in Faith". They contain brief descriptions of books I have read and found up-lifting and helpful. Enjoy!

Image appears over Fr. Paul's head during Holy Mass - is it our Blessed Mother? It could be! 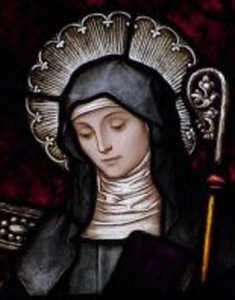 I was having an interesting discussion yesterday regarding St. Brigid (sometimes confused with St. Bridget of Sweden), a Celtic saint. This led me to look up some more information about her from Catholic Encyclopedia. This is what I found:

Born in 451 or 452 of princely ancestors at Faughart, near Dundalk, County Louth; d. 1 February, 525, at Kildare. Refusing many good offers of marriage, she became a nun and received the veil from St. Macaille. With seven other virgins she settled for a time at the foot of Croghan Hill, but removed thence to Druin Criadh, in the plains of Magh Life, where under a large oak tree she erected her subsequently famous Convent of Cill-Dara, that is, "the church of the oak" (now Kildare), in the present county of that name. It is exceedingly difficult to reconcile the statements of St. Brigid's biographers, but the Third, Fourth, and Fifth Lives of the saint are at one in assigning her a slave mother in the court of her father Dubhthach, and Irish chieftain of Leinster. Probably the most ancient life of St. Brigid is that by St. Broccan Cloen, who is said to have died 17 September, 650.

Cogitosus, a monk of Kildare in the eighth century, expounded the metrical life of St. Brigid, and versified it in good Latin. This is what is known as the "Second Life", and is an excellent example of Irish scholarship in the mid-eighth century. Perhaps the most interesting feature of Cogitosus's work is the description of the Cathedral of Kildare in his day: "Solo spatioso et in altum minaci proceritate porruta ac decorata pictis tabulis, tria intrinsecus habens oratoria ampla, et divisa parietibus tabulatis". (The rood-screen was formed of wooden boards, lavishly decorated, and with beautifully decorated curtains. )

Probably the famous Round Tower of Kildare dates from the sixth century. Although St. Brigid was "veiled" or received by St. Macaille, at Croghan, yet, it is tolerably certain that she was professed by St. Mel of Ardagh, who also conferred on her abbatial powers. From Ardagh St. Macaille and St. Brigid followed St. Mel into the country of Teffia in Meath, including portions of Westmeath and Longford. This occurred about the year 468. St. Brigid's small oratory at Cill-Dara became the centre of religion and learning, and developed into a cathedral city. She founded two monastic institutions, one for men, and the other for women, and appointed St. Conleth as spiritual pastor of them. It has been frequently stated that she gave canonical jurisdiction to St. Conleth, Bishop of Kildare, but, as Archbishop Healy points out, she simply "selected the person to whom the Church gave this jurisdiction", and her biographer tells us distinctly that she chose St. Conleth "to govern the church along with herself".

Thus, for centuries, Kildare was ruled by a double line of abbot-bishops and of abbesses, the Abbess of Kildare being regarded as superioress general of the convents in Ireland.

Not alone was St. Bridget a patroness of students, but she also founded a school of art, including metal work and illumination, over which St. Conleth presided. From the Kildare scriptorium came the wondrous book of the Gospels, which elicited unbounded praise from Giraldus Cambrensis, but which has disappeared since the Reformation.

According to this twelfth- century ecclesiastic, nothing that he had ever seen was at all comparable to the "Book of Kildare", every page of which was gorgeously illuminated, and he concludes a most laudatory notice by saying that the interlaced work and the harmony of the colours left the impression that "all this is the work of angelic, and not human skill".

Small wonder that Gerald Barry assumed the book to have been written night after night as St. Bridget prayed, "an angel furnishing the designs, the scribe copying". Even allowing for the exaggerated stories told of St. Brigid by her numerous biographers, it is certain that she ranks as one of the most remarkable Irishwomen of the fifth century and as the Patroness of Ireland. She is lovingly called the "Queen of the South: the Mary of the Gael" by a writer in the "Leabhar Breac". St. Brigid died leaving a cathedral city and school that became famous all over Europe. In her honour St. Ultan wrote a hymn commencing:
Christus in nostra insula Que vocatur Hivernia Ostensus est hominibus Maximis mirabilibus Que perfecit per felicem Celestis vite virginem Precellentem pro merito Magno in numdi circulo.
(In our island of Hibernia Christ was made known to man by the very great miracles which he performed through the happy virgin of celestial life, famous for her merits through the whole world.)
The sixth Life of the saint printed by Colgan is attributed to Coelan, an Irish monk of the eighth century, and it derives a peculiar importance from the fact that it is prefaced by a foreword from the pen of St. Donatus, also an Irish monk, who became Bishop of Fiesole in 824. St. Donatus refers to previous lives by St. Ultan and St. Aileran. When dying, St. Brigid was attended by St. Ninnidh, who was ever afterwards known as "Ninnidh of the Clean Hand" because he had his right hand encased with a metal covering to prevent its ever being defiled, after being he medium of administering the viaticum to Ireland's Patroness.

She was interred at the right of the high altar of Kildare Cathedral, and a costly tomb was erected over her. In after years her shrine was an object of veneration for pilgrims, especially on her feast day, 1 February, as Cogitosus related. About the year 878, owing to the Scandinavian raids, the relics of St. Brigid were taken to Downpatrick, where they were interred in the tomb of St. Patrick and St. Columba. The relics of the three saints were discovered in 1185, and on 9 June of the following year were solemnly translated to a suitable resting place in Downpatrick Cathedral, in presence of Cardinal Vivian, fifteen bishops, and numerous abbots and ecclesiastics. Various Continental breviaries of the pre-Reformation period commemorate St. Brigid, and her name is included in a litany in the Stowe Missal.

In Ireland today, after 1500 years, the memory of "the Mary of the Gael" is as dear as ever to the Irish heart, and, as is well known, Brigid preponderates as a female Christian name. Moreover, hundreds of place-names in her honour are to be found all over the country, e.g. Kilbride, Brideswell, Tubberbride, Templebride, etc. The hand of St. Brigid is preserved at Lumiar near Lisbon, Portugal, since 1587, and another relic is at St. Martin's Cologne.
Text taken from http://www.newadvent.com/

The interesting part of this whole essay is that it is not mentioned directly but Brigid (pronounced Breed in the ancient Gaelic) is often confused, and their stores interwoven, with another Brigid who was a pagan and honored as a goddess. The whole idea that St. Brigid's convent was underneath a large oak tree, oaks being highly venerated by the Druids and priestesses of pagan Ireland, certainly has reinforced the idea for centuries.

Edward C. Sellner, in his book Wisdom of the Celtic Saints states that 'nuns at her monastery are said to have kept an eternal flame burning there, a custom that may have originated with female druids residing at that spot long before the saint arrived. Their leader supposedly was a high priestess who bore the name of the goddess Brigit or Brighid, a deity of wisdom, poetry, fire and the hearth. Like other Celtic goddesses who sometimes appear in groups of threes, the goddess Brigit was associated with two sisters by the same name -- one who was patron of healing and the other of the smith's craft. The attributes were eventually identified with Brigit, the saint, whose feast day, February 1, came to be celebrated on the same day as that of the pagan goddess.'

This is just one of the many Celtic saints Sellner describes in his wonderful book, Wisdom of the Celtic Saints and if you find this an interesting topic, this would be a great place to start learning more of the holy men and women now known to us as the Celtic Saints. Happy reading!